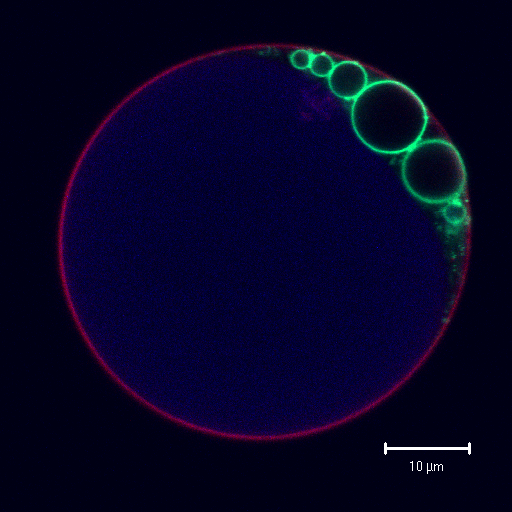 If you open a random biology book and look for a picture of a plant cell, you will see that there is always a large cavity in the middle of these cells. This is the vacuole. It is an important place of cellular storage in which plants can store all kinds of substances. The vacuole contains both reserve nutrients and waste, the vacuoles in the cells on the surface of the flowers contain pigments that determine the color of the flowers, in the fruits they contain the acids and sugars that give the fruit their taste , plants growing in salty conditions can store excess salt in vacuoles, and so on. So far, it seems pretty straightforward.

â€œBut, twenty years ago, it was discovered that certain plant cells had several vacuoles. And that these can also have very different functions â€, explains Ronald Koes. â€œSince then, the big question has been how this is possible. How do these extra vacuoles form? And how does the plant cell know which substances should go in one vacuole and which in the other?

This biological enigma fascinated Koes and his wife Francesca Quattrocchio, both of whom work as geneticists and molecular biologists at the Swammerdam Institute for Life Sciences at the University of Amsterdam. They found the first possible clue to the solution in 2017. At the time, Quattrocchio and Koes led a team that discovered a whole new type of plant cell component: smaller vesicles containing the same substances as the vacuole, which carried these substances to the central vacuole. . They called these additional vacuoles vacuolinos (Italian for small vacuoles).

In a study now published in the scientific journal Cell Reports, biologists describe a new step towards solving the fundamental puzzle. Having previously discovered the existence of vacuolinos, they have now also discovered which gene is crucial for the formation of vacuolinos. This is a gene called RAB5a. Through experiments with petunias, researchers found that turning off this gene ensures that petunia cells no longer contain vacuolinos. On the other hand, overexpression of the gene leads to larger vacuolinos. â€œThey can get so big that they themselves almost look like vacuoles,â€ Koes explains.

Quattrocchio and Koes noticed that the RAB5a gene became very active in the flower bud cells of their late-stage petunias. Pigment production occurs at an early stage. The result was that in addition to the central vacuole, which contained a lot of pigment, several large vacuolinos were created in which no pigment could be seen. â€œWhat was interesting was that the size and number of these vacuolinos determined not only the color, but also the shape of the cells and therefore the petals,â€ Quattrocchio explains. Koes adds: “What this also shows is that it may not always be necessary to have a complex sorting mechanism in plant cells to determine which substances end up and which do not end up in the plant cells. “one of the many vacuoles. It is also possible that this is regulated automatically, as the additional vacuoles occur at a different time.”

The RAB5a gene is present in many plant species, suggesting that Quattrocchio and Koes have discovered a fairly universal biological mechanism. The gene is for example also active in citrus fruits. â€œSo maybe the cells in citrus fruits also contain vacuolinos,â€ Koes explains. The question is, what is their function here? A few years ago, the team described a fundamental biological mechanism that regulates the amount of acid present in the vacuole of citrus cells, which determines whether the fruit tastes sour or sweet. It’s still speculation, but with the discovery of vaculinos and these first glimpses of their function, Koes and Quattrocchio may have found another fundamental biological mechanism that determines the taste of citrus fruits.

There is also an important exception for plants that have RAB5a: Arabidopsis, the widely studied plant that biologists consider a good standard model, does not have this gene.