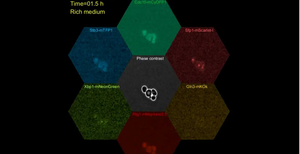 Researchers at UT Southwestern have identified a new mechanism by which stress prevents cells from dividing.

Using techniques created at UT Southwestern, the team identified a protein in yeast that plays a previously unrecognized role in cell cycle arrest, the process by which a cell reproduces itself. dividing in two. After accumulating in response to stressful events, the Xbp1 protein appears to suppress the cell cycle, the study suggests.

The results, published in the Journal of Cell Biology, seem to solve a long-standing cell cycle mystery. If scientists can identify a protein in mammals with a similar function, the research could potentially lead to new ways to accelerate wound healing by promoting cell division or improve cancer treatment by doing the opposite.

“Scientists have been studying this fundamental process for almost seven decades,” said Orlando ArgÃ¼ello-Miranda, Ph.D., an instructor who co-led the study with the assistant professor Jungsik Noh, Ph.D., both from UTSW’s Lyda Hill Department of Bioinformatics. “We have essentially identified a protein that can stop the cell cycle in response to stressful conditions.”

Scientists have long known that the cell cycle consists of several defined stages when a cell goes from a state of rest to an increase in size as it copies its genetic material – or DNA – in a process known as replication. of DNA, condenses its DNA and eventually divides into two “daughter” cells.

It has long been known that a stressful event such as starvation can send a cell into a protective state known as quiescence. Typically, the cell cycle stops just before DNA replication, explained Dr ArgÃ¼ello-Miranda. However, a minority of cells appear to become inactive at other stages of the process.

To understand why, Dr ArgÃ¼ello-Miranda, Dr Noh and their colleagues studied yeast cells under nutritional stress. Researchers were able to study single cells in this condition using a technique called six-color microfluidic imaging developed at UT Southwestern. This technique combines a cell culture technology called microfluidics with a six-color fluorescent microscopy approach pioneer at UTSW in 2018. In six-color microfluidic imaging, investigators pass cells through a tiny fluid-filled chamber monitored using a specialized microscope and an array of cameras. The researchers also used machine learning to track and detect up to six biochemical reactions in individual cells in real time.

“In previous field studies, researchers grew yeast cells in flasks and were unable to track individual cells,” said Dr ArgÃ¼ello-Miranda. “In contrast, we got films that record how individual cells stop dividing and come to rest.”

Although most hungry cells went to rest at the expected stage, just before DNA replication, about 7% stopped at some other stage of the cell cycle, he said.

Using the new techniques to tag and track specific proteins in individual cells over time, the researchers found that all starving cells exhibited high levels of a series of stress response proteins. However, cells that became quiescent at unexpected times in the cell cycle all exhibited an abundance of Xbp1, which the study found is needed to stop the cell cycle after DNA replication.

Further experiments have shown that this build-up of Xbp1 causes the cell cycle to pause, even when the activity of another protein called Cdk1 that encourages cell proliferation is high. Closer examination showed that Xbp1 levels were not static – on the contrary, they rose higher after each stressful event experienced by an individual cell or longer a stressful event lasted.

“This build-up was so predictable that we could tell how many stressful events a cell had been exposed to by the amount of Xbp1 present in the cell nucleus,” said Dr ArgÃ¼ello-Miranda. The results suggest that Xbp1 has a newly discovered function in cell cycle regulation, allowing yeast cells to â€œrememberâ€ stress exposure and protect themselves upon entering rest, he added.

Although there is no direct homolog to Xbp1 in mammals, other proteins appear to show similar biochemical activity in mammalian cells. These proteins will be the subject of future research, he said.

Other UTSW researchers who contributed to this study include Ashley J. Marchand, Taylor Kennedy, and Marielle AX Russo.

UT Southwestern, one of the nation’s leading academic medical centers, integrates pioneering biomedical research with exceptional clinical care and education. The institution’s faculty has been awarded six Nobel Prizes and includes 25 members of the National Academy of Sciences, 16 members of the National Academy of Medicine and 14 researchers of the Howard Hughes Medical Institute. The full-time faculty of over 2,800 is responsible for revolutionary medical advancements and is committed to rapidly translating science-driven research into new clinical treatments. Doctors at UT Southwestern provide care in approximately 80 specialties to more than 117,000 inpatients, more than 360,000 emergency room cases and supervise nearly 3 million outpatient visits per year.

Disclaimer: AAAS and EurekAlert! are not responsible for the accuracy of any press releases posted on EurekAlert! by contributing institutions or for the use of any information via the EurekAlert system.