Members of United Auto Workers Locals 5810 and 2865 — which represent postdoctoral workers and students, respectively — as well as members of the new Student Researchers United rallied across the state on April 26 to rally support for their campaigns. respective contracts. 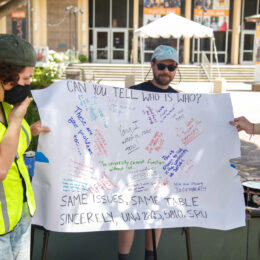 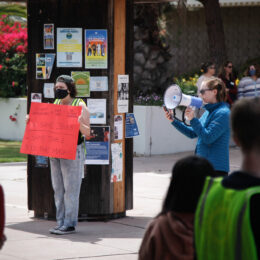 The three unions representing various employees at the University of California are renegotiating their contracts and working to leverage their more than 48,000 combined members to win concessions from the university on issues such as affordable housing. , salary and child care.

Members of the three unions gathered on UC campuses for coordinated marches, advocating for fair wages and workplace policies. The largest protests took place at UC San Diego, UC Berkeley and UC Los Angeles, where supporters blocked roads as they marched and were met by police in SWAT gear.

At UC Santa Barbara, union members and supporters gathered outside Cheadle Hall, where individuals gave speeches before the group marched to Chancellor Henry T. Yang’s office on the fifth floor.

Payton DeMarzo, a doctoral student in biomolecular science and engineering, said her focus is on protections against discrimination.

“We shouldn’t have to deal with toxicity because we’re afraid of being kicked out of a lab and having to start our thesis over again,” she said. “We shouldn’t be penalized for the actions of the abuser, and that’s something I really care about.”

“We make them listen by coming out and showing them that this is something we are not going to budge on. Human rights are not a bargain,” DeMarzo continued.

Katharine Dickson, a PhD candidate in molecular biology and a member of Student Researchers United (SRU), led the group in a series of chants, reciting “48,000 ready to fight, postdocs, ARs, graduates, unite.”

Evan Plunkett, a postdoctoral fellow with the UCSB Chabinyc research group, shared his experiences during a previous bargaining session with the university held for United Auto Workers Local 5810 contract renegotiations.

Plunkett recounted how the union waited more than half an hour for university officials to arrive, only to present a pay package identical to the one proposed six months ago.

“The university is presenting its compensation package from six months ago, unchanged, instead of talking about how it’s going to pay us enough to live and work in this community,” he said. “They explain how a modified pay schedule will magically solve the problem of the millions of dollars they stole from the pockets of postdocs through late and delayed salaries.”

As negotiations begin with the SRU, the university has declared that they “undertake to ensure that [union members] are fairly compensated [their] workplace”, as well as “Ensuring a safe, respectful and supportive work environment for all employees”.

Robert McLaughlin, a doctoral researcher in computer science, said that although many UC employees are members of different unions, they share similar struggles, including high rent and a need for childcare.

“So we’re specifically asking for a joint bargaining table for those topics… But UC has actually already rejected that,” he said.

After the speeches, members of the three unions wrote unsigned personal messages defending the unions’ goals on a poster addressed to Yang that read, “Can you tell who is who?

The group eventually made their way to the fifth floor of Cheadle Hall, sticking the poster above the door to the Chancellor’s office and posing for photos.

A version of this article originally appeared on p. 1 of April 28, 2022, print edition of the Daily Nexus.