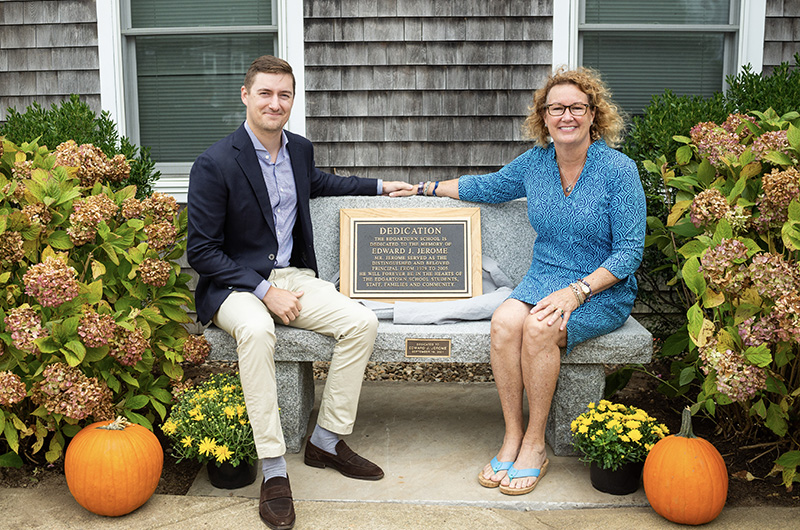 On Saturday morning, more than a hundred people gathered at Edgartown School on Robinson Road to pay their respects to former principal Edward Joseph (Ed) Jerome. Mr. Jerome was the principal of the school which, from 1979 until his retirement in 2005, created a community culture of academic excellence and camaraderie, with the schoolchildren of Edgartown at its center.

On the third anniversary of his death, the school building was dedicated in his honor. Memorial dedications include a granite bench created by Alan Gowell of Martha’s Vineyard Memorials that will sit outside the school in the front circle, just under the windows of the principal’s office. The bench will be engraved with a familiar quote from Dr Seuss about the places you will go if you read, learn and know. Plaques commemorating Mr. Jérôme’s character, commitment, energy and service will be placed outside and inside the school.

Mr. Jerome’s most visible legacy stood behind the podium at Saturday’s event: the Edgartown School building itself. He envisioned it with the idea of ​​incorporating images from the city’s maritime history and pushed the project through a process of extensive public hearings and permits review, including two failed city votes. The new building opened in 2003 and houses 550 students in classrooms and 600 in its main facilities.

“This is the house that Ed built,” said Sandy Joyce, a retired special education teacher, welcoming the throngs of past and present teachers, alumni, current and future teachers. future students, community members and family. Uniformed members of the Edgartown Police Department gathered as a group. Conversation circles have formed around Maryanne and Nick Jerome, the wife and son of the late principal.

The dominant theme of the remarks and conversations was summed up by retired Edgartown School guidance counselor Mike Joyce Sr.: “Ed Jerome has always found a way. budget for the benefit of staff, students and community members rather than making cuts that would have impacted the excellence of the experience. 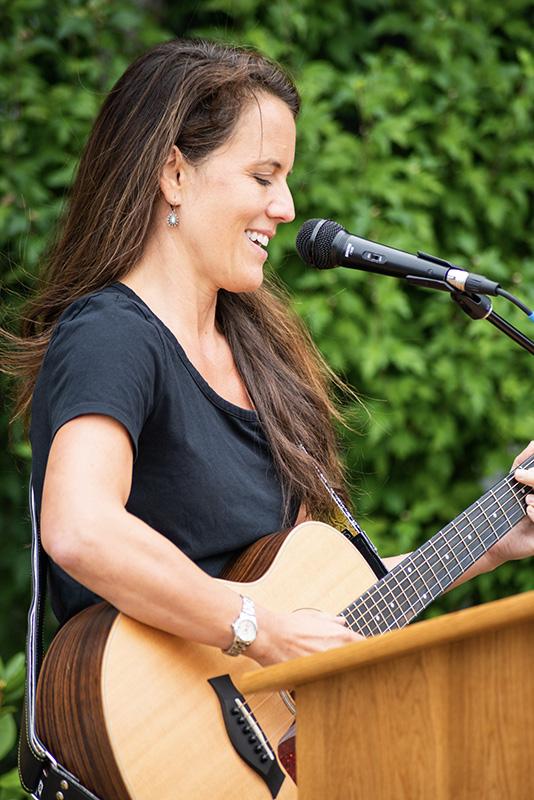 Many memories were shared: children in Kindergarten to Grade 3 walking through downtown Edgartown during construction to their temporary classrooms at the Federated Church and other locations; Mr. Jérôme delighting the students by greeting them in the school circle on their arrival in the morning; lunch with kindergarten children; donate books for birthdays; and talk about fishing in his office (Mr. Jérôme was the longtime president of the derby.)

Joanne Cassidy recalled the year she dressed for Halloween as a director with a hook caught in her bloody thumb. On Saturday, Ms. Cassidy played guitar and sang a version of Look To The Rainbow, which she had not performed since graduating from eighth grade from the Edgartown school.

Not all memories were about education. Chris Scott, treasurer of Martha’s Vineyard Striped Bass and Bluefish Derby, joked about his friend’s familiarity with the best fishing spots and their ritual of fishing together from 6 a.m. to 6 p.m.

Mr Scott noted that since Mr Jerome launched the derby scholarship program, 116 students have received $ 763,000 in scholarships for studies in marine biology and climatology as well as fine and performing arts. .

Maryanne Jerome and Nick Jerome spoke of Mr. Jerome as husband and father, respectively, as an accomplished professional educator who won the National Distinguished Principals Award and whose accomplishments were not aimed at self-glory, but at students who gave him joy. 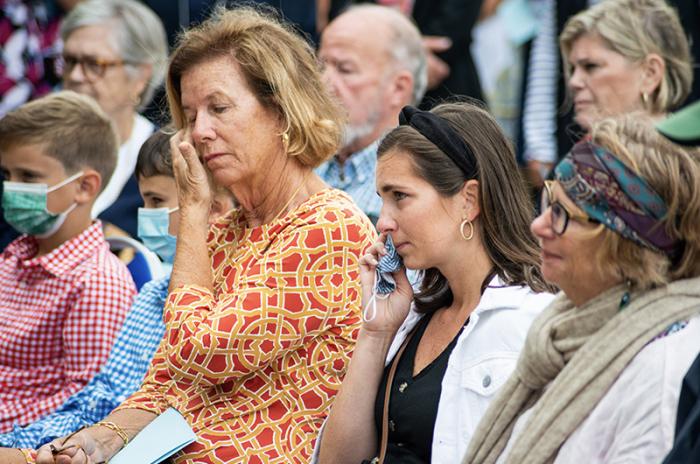 Friends, families, former and current students and teachers – all came to pay tribute to the longtime principal of Edgartown School. – Ray ewing

Retired science teacher David Faber thanked the donors who helped make the purchase of the bench and plaques possible. A committee of friends, many of whom were former teachers from Edgartown School, set a goal of raising $ 4,000 to $ 5,000 to pay for the memorials. Mr. Faber shared with a laugh that the derby committee made a significant donation which included a nod to Mr. Jerome’s long-standing registration number: 41.

At the end of the dedication, participants took advantage of the sun that was beginning to rise as Ms. Joyce stepped onto the podium to start the event. Many people stayed to meet and enjoy the treats prepared by the school’s kitchen staff. Others got back to their cars and drove the short distance down Edgartown-West Tisbury Road to Coop’s Bait and Tackle, getting ready, no doubt, for another day on the water, which is probably exactly what that Ed Jerome would have liked them to do.