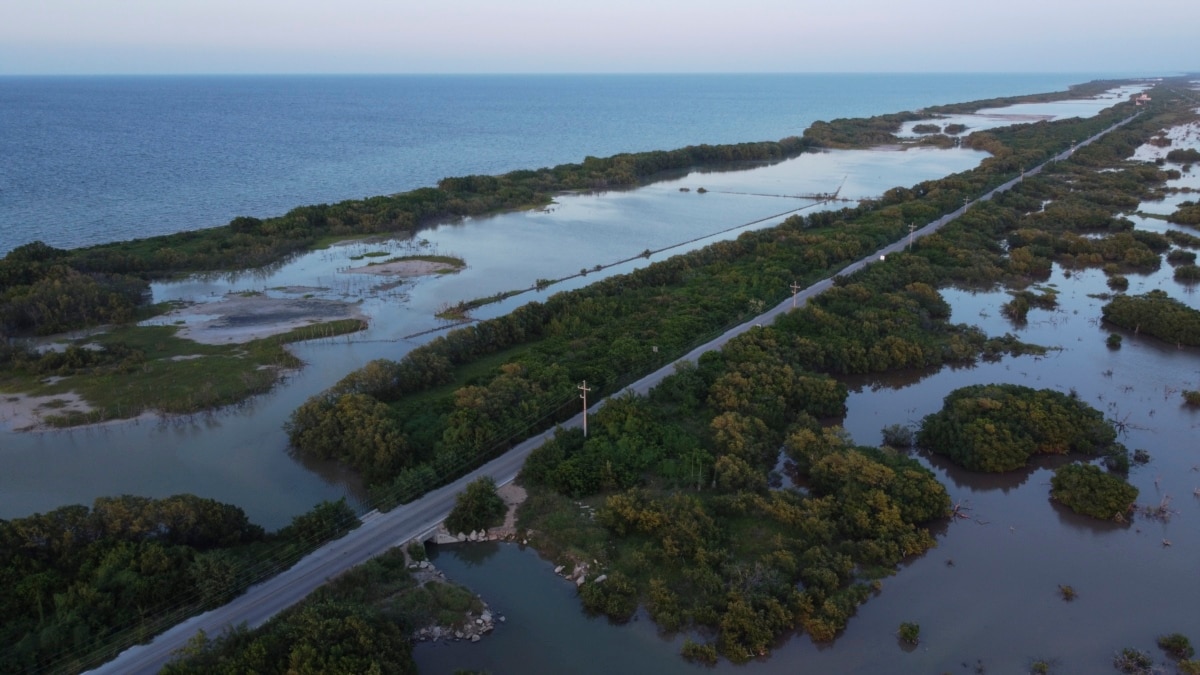 As leaders gather in Scotland for the United Nations climate change conference, a real-time battle to defend Mexico’s forests continues.

There, in the Yucatan Peninsula, people are working to protect and expand the mangrove forests. Low trees grow in aquatic areas near ocean coasts. They provide defensive shelter from dangers like large storms. They also capture carbon dioxide, the main waste gas that causes the Earth’s temperature to rise.

Years ago, mangroves were found all along the coast of Yucatan. Today there are few.

A team of villagers from the region is trying to renew the forests. Scientists and donations are supporting the effort. The Mexican government helps pay for the cost of training the team.

The villagers joined the renewal effort over 10 years ago with scientist Jorge Alfredo Herrera, from the Center for Research and Advanced Studies at the Mexican Polytechnic Institute of Yucatan. He told them that the mangroves needed a network of canals where fresh water and salt water could mix.

The search was going to be hard work and the pay was only four dollars a day. A group of women from Chelem, a fishing village, took over the jobs, believing they could make substantial gains with little money.

Recently, after a heavy rainy season, the workers completed the second part of the process: planting young mangroves near the city.

They placed 20-inch mangrove seeds in small hills of mud, creating islands of about one square meter.

“The happiest day is when our plants are set,” said Keila Vázquez, 41. “They are like our children.

This mangrove renewal effort is similar to others around the world. Scientists and community groups increasingly recognize the need to protect and restore forests.

“Mangroves are a very important ecosystem for fighting climate change,” said Octavio Aburto. He is a marine biologist at the Scripps Institution of Oceanography in San Diego, California.

While the tropical trees only grow on less than 1 percent of the earth’s land, he said: “They can bury about five times as much carbon in the earth. sediment than a tropical rain forest.

Yet all over the world, mangroves are being destroyed. From 1980 to 2005, up to 35 percent of the world’s mangroves were lost, according to the Food and Agriculture Organization of the United Nations.

In Mexico, as in much of the world, development is the main threat to the existence of mangroves. The Cancun area, a popular vacation spot, lost most of its mangroves to roads and hotels from the 1980s. Mangroves on the country’s southern Pacific Ocean coast have also been cleared for land use. up to fish farms. Oil industry operations in waters off the Gulf of Mexico also threaten mangroves, Aburto said.

Mexico began protecting its mangroves in the 1980s. Mexico took steps to create a climate action plan in 1998 and was one of the first developing countries to sign the Paris Climate Agreement. . But Julia Carabias of the National Autonomous University of Mexico said the country’s government had recently cut back its support. Carabias says resources for environmental protection have been cut by 60 percent over the past six years.

Efforts to save mangroves

Restoration efforts have been made around the world to protect mangroves.

In 2020, the Indonesian government has set a target of planting mangroves on more than 600 hectares of coastline by 2024. Government agencies are involved in renewal efforts that include community outreach and education.

But there were some issues. Mangrove data is difficult to collect and exact maps are few. In addition, powerful waves swept newly planted mangroves towards the sea. And COVID-19 has slowed community awareness and education efforts.

Manuel González is a 57-year-old fisherman. He has helped regrow many mangroves in the community of Dzilam de Bravo, about 97 kilometers east of Progreso. Some trees are already 9 meters high.

A powerful storm destroyed a large part of the area in 2002. Today, after 10 years of work, 120 hectares of mangroves are being renewed. González says the storms don’t cause as much damage to the community as a result. And, he adds, fish and wildlife are back.

But mangroves face a new threat.

“In 10 years, you will have a very beautiful mangrove for someone with a chain saw to come and take it, ”González said. “This is something that really hurts me.”

I am Dan Novak.

The Associated Press reported this story. Dan Novak adapted it for VOA Learning English. Caty Weaver was the editor.

Words in this story

channel – nm a long, narrow place that is filled with water and was created by man for boats to pass through or to supply water to fields, crops, etc.

tropical – adj. of, relating to, occurring in, or used in, the tropics

sediment – nm mmatter flowing at the bottom of a liquid