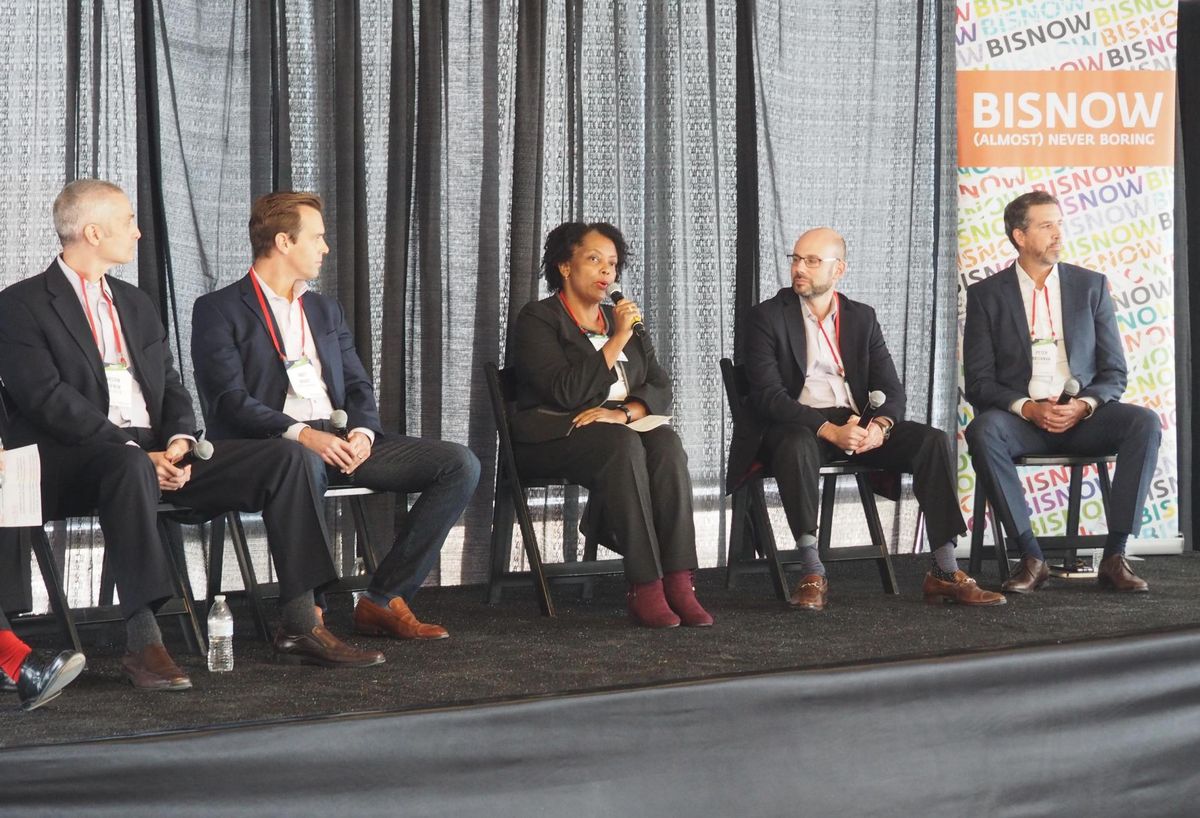 Maryland’s Interstate 270 Corridor has been a thriving life sciences hub for several years, but with the federal government pumping billions into the area during the coronavirus pandemic and more established research tenants starting to mature , the DC-Baltimore region has become the third-fastest growing life sciences market in the country, according to a recent report from CBRE.

All of this demand led to a race to build new lab and manufacturing spaces before potential employers started looking elsewhere.

“What keeps me from sleeping at night in the life sciences context is the speed to market,” Montgomery County Planning Council Commissioner Tina Patterson told by bisnow Mid-Atlantic Life Sciences and Biotechnology Summit last week.

To meet demand, Montgomery County Council is pushing through a zoning amendment that would reduce the time it takes for the new life sciences space to go from sketch to development from 600 days to 160 days.

Patterson said the amendment proposed by Council Member Andrew Friedson, which would create a “priority biohealth campus” use in the county’s zoning ordinance, would be a game-changer for new development. Life science experts at the event said speed was by far the most critical factor for biotech companies.

“These guys don’t have a year or a year and a half to deliver their space,” said Scheer Partners senior vice president Matthew Brady. “They get … where their funds come from, and they start to burn that capital.”

Brady said the best way to meet demand is to build lab space on a speculative basis, which has always been a rarity in suburban Maryland.

“Taking that risk up front and building a spec space… is imperative right now because it doesn’t happen in 18 months; it usually happens in less than six,” Brady said.

CBRE found in its report last week that the DC-Baltimore area had 31 tenants – almost doubling in the past six months – looking for 1.8 million square feet of active requirements, split almost evenly between lab and l manufacturing space. The region has 650,000 square feet of availability between existing inventory and spaces under conversion, according to CBRE, with 714,000 square feet expected to be delivered by the end of 2022.

This demand caught the major institutions by surprise. In Baltimore, the University of Maryland, Johns Hopkins, and the city itself have only recently started planning for the development of a lab space that can keep biomedical research spinoffs from local universities. Demand in the suburbs between Baltimore and DC is just as high – the vacancy rate for the area is only 1.9%.

Brady said investors can sometimes be reluctant to build on specs, but he said the demand is there to create space on a schedule that works for small businesses or emerging companies entering the market. the market now.

“Life sciences are inherently risky business, and everything that goes with it is risky as well,” Brady said. “Understand that tenure and speed of tenure are critical for these people, and understand that the risk associated with developing something on a specific basis in a high-risk business is one of the limiting factors in everything. Marlet “

He noted that while some types of medical offices or lab space can be built for a relatively wide range of potential tenants, biofabrication space is a much harder sell.

“You wouldn’t want to build a bottling plant and hope Coca-Cola takes it because they like the way you built it,” Rifkin said.

Brian Darmody of the Association of University Research Parks, Amy Adams of the George Mason University Institute for BioHealth, Ken Jenkins of the NFP, Brad Stewart of Montgomery County Economic Development Corp., Ulyana Desiderio of the Maryland Department of Commerce and Jeff Boyle of Ellume USA

Meanwhile, the talent pipeline to fill those gaps is just as strained. Rifkin said many of his clients admit to struggling to find the talent they need.

“We hear over and over again that all of these companies are having a hard time finding people,” Rifkin said. “They are starting to cannibalize each other’s individuals.”

GlenLine Investments founder and CEO Scott Nudelman said the industry needs to be “laser-focused” on growing the labor pool for biofabrication and other science jobs. life that does not require graduate degrees if the region is to continue its record expansion.

He noted that although the region is one of the top five life sciences markets, there is still room for improvement to attract venture capital funds, which he says will come with an offer. stronger workforce.

“We can certainly focus on large companies, but we should also focus on two-year programs, four-year programs, workforce development from quality control to doctorates and to executives, ”Nudelman mentioned. “I think if we really lead with this, we’ll continue to grow to maintain our presence in the top 5 that we enjoy today.”

“The distance between NC State and Duke is about the same as between Johns Hopkins and College Park, but we look at College Park and Baltimore as two different regions, while Research Triangle, they’ve overcome that,” Darmody said. “We don’t think as a region.

While federal life science centers like the National Institutes of Health and the Food and Drug Administration are based in Montgomery County, Nudelman said the region should do a better job of encouraging these scientists to become businesses.

“We need to laser focus on the stories of champion government scientists who have entered the private sector,” Nudelman said. “We don’t have what exists in Kendall Square, where MIT supports scientists entering the private sector. We don’t have the Research Triangle Park. This public-private partnership is somewhat lacking. In the next five years , I think the challenge for all of us is to evolve this ecosystem. ”

Nonetheless, the growth of the market portends a lot of room for optimism, said Ulyana Desiderio, director of biohealth and life sciences at the Maryland Department of Commerce. Desiderio is focused on finding ways to retain talent, from academia to marketing to manufacturing, to ensure that the regional life science industry can encompass all stages of business development.

She said universities were collaborating more today than they had before and noted that NIH funding had returned to high levels after several years of sequestration and budget cuts.

“There are hundreds of businesses in somebody’s head right now or on a piece of napkin,” Desiderio said. “When it comes to what’s happening online, the growth we’re seeing is very exciting and we’re very happy. “