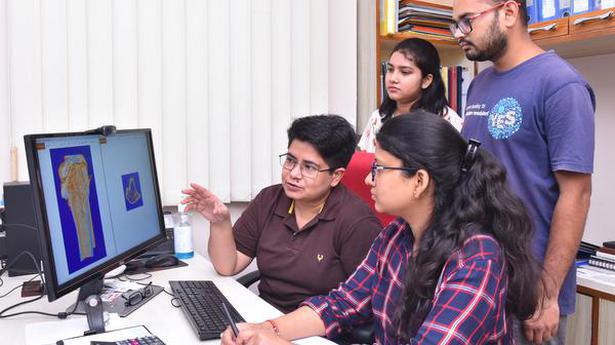 In mice, BET inhibitors used alone or in combination with anti-androgen drugs have been shown to be effective

The DLX1 protein is found at high levels in prostate cancer patients, which is why the DLX1 protein has been used as a urine-based biomarker. Now, the team of researchers led by Dr. Bushra Ateeq, professor at the Department of Biological Sciences and Bioengineering, IIT Kanpur has discovered that the DLX1 protein, which is expressed at higher levels in prostate cancer cells , has a huge role in the growth and development of the tumor and the spread of cancer to other organs of the body (metastasis).

First, the researchers found that about 60% of prostate cancer tissue had higher levels of the DLX1 protein. And when the team genetically deleted the DLX1 gene that produces the protein, the ability of cancer cells to grow, develop and spread to other parts of the body was compromised.

“We used mouse models to further determine the role of the DLX1 protein in prostate cancer growth and metastasis,” says Sakshi Goel of IIT Kanpur and first author of an article published in Nature Communication.

The second experiment in mice looked at the ability of cancer cells to metastasize and grow in bones. â€œProstate cancer cells tend to metastasize into the bones. We therefore verified the role of the DLX1 protein in cancer metastases, â€Goel explains. To do this, they used cancer cells that had been removed from DLX1 or expressed higher levels of protein, and implanted the cancer cells in the tibia (bone) of the mice. One month after implantation, the tumor growing in the tibia was monitored by CT scan. Mice implanted with cancer cells with elevated DLX1 levels exhibited more bone damage than cells that had DLX1 ablated. â€œThese results proved the role of DLX1 in the growth of prostate tumors and bone metastases,â€ says Goel.

The androgen receptor is responsible for promoting the development of prostate cancer. In addition, approximately 50% of prostate cancers harbor an aberrant gene which is the product of the fusion of two genes (TMPRSS2 and ERG) and results in the production of higher levels of ERG protein.

â€œInterestingly, exploring the association between these important factors revealed that approximately 96% of patients with TMPRSS2-ERG fusion positive prostate cancer also have elevated levels of DLX1 protein. Along with this, around 70% of patients with high androgen receptor signaling also have high levels of DLX1 protein, â€explains Prof Ateeq.

The researchers further showed that the androgen receptor and the fusion gene product, ERG, are responsible for increasing the level of DLX1 in prostate cancer cells. Understanding the mechanism responsible for the growth and development of prostate cancer, and its spread to distant organs, the researchers set out to find a way to reduce the expression of the DLX1 protein in cells. cancerous. They found that a particular protein (bromodomain and extra-terminal or BET) assists the function of both the androgen receptor and the ERG. â€œWe have found that if the BET protein is inhibited using small molecules, the function of the androgen receptor and ERG protein to upregulate DLX1 is inhibited. As a result, the expression of the DLX1 protein and its tumorigenic potential are reduced, â€Goel explains.

Preclinical studies in mice have shown that administration of BET inhibitors alone or in combination with antiandrogen drugs resulted in an approximately 70% reduction in tumor burden as well as a decrease in distant metastasis. â€œProstate cancer patients with higher levels of DLX1 may benefit from this treatment strategy. There are several commercially available diagnostic tests to detect DLX1 levels, so it is relatively easy to categorize patients who might respond to BET inhibitors, â€says Prof Ateeq.