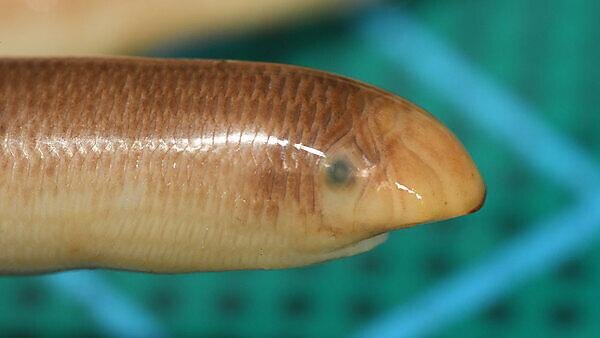 An international team of scientists, led by the Natural History Museum and the University of Plymouth, carried out the first detailed analysis of genetic sequence data for all species of the so-called “blind snakes” (Scolecophidia), a group of small-eyed burrowers.

They found that seven of the 12 genes associated with bright light vision in most species of snakes and lizards are not present in scolecophidians.

This, they say, demonstrates an extensive loss of vision genes over tens of millions of years of evolutionary history, similar to that which has also been seen in burrowing mammals with reduced vision.

It also challenges the hypothesis that all snakes living in the world today evolved from extreme burrowers, as vision genes lost in scolecophidians are present in most other living snakes. The researchers say it would be extremely unlikely that such genetic deficiencies were reversed by evolution.

The scolecophidians are dedicated diggers and form half of the oldest snake tree divergence. They include about 460 of the approximately 3,850 living snake species currently recognized and likely diverged from their closest living relatives (Alethinophidia, which includes all other living snakes) over 65 million years ago.

Scolecophidians are typically small, cylindrical burrowing snakes with reduced eyes and a small mouth, very different from the more familiar alethinophidians, which include pythons, vipers, and cobras.

For this research, published in Biology and evolution of the genome, scientists have generated new DNA sequence data for the blind black-thorn snake (Anilios bicolor) and blind-toothed snake (Anilios bituberculatus), both common in southern Australia.

They then compared their results with similar data for functional vision genes in other species of snakes and lizards.

Lead author Dr David Gower, Head of the Vertebrate Life Sciences Division at the Natural History Museum, said: “Our data and analytical results provide clear evidence of a very substantial reduction in elements of the visual system of burrowing scolecophid snakes. We already knew that snakes lost some vision genes and eye structures during their evolution from lizards, but most have been retained nonetheless. As a result, our study strongly suggests that the ancestor of all living snakes was unlikely to have been as extreme a burrower as living scolecophidian snakes. “

The same team of researchers published a study in May 2020, which found that the visual systems of sea snakes have undergone remarkable adaptation to underwater life over 15 million years.

Dr Bruno Simões, Senior Lecturer in Animal Biology at Plymouth University, led this research and is the lead author of this study. He said, “The nature of the ancestral serpent has been much debated. It has been suggested that he had developed a reduced visual system due to possible burrow ecology. Our research provides new information on the probable ecology and environment of the ancestor. serpent and suggests that the highly subterranean lives and shrunken eyes of living scolecophidian snakes likely evolved as specializations rather than the retention of primitive characteristics. This study also shows a convergent evolution between subterranean snakes and burrowing mammals with loss of similar genes, particularly those associated with bright light and color vision. ”

Provided by the University of Plymouth


Quote: Burrowing snakes have much worse eyesight than their ancestors (2021, December 9) retrieved December 9, 2021 from https://phys.org/news/2021-12-burrowing-snakes-worse-eyesight-ancestors.html