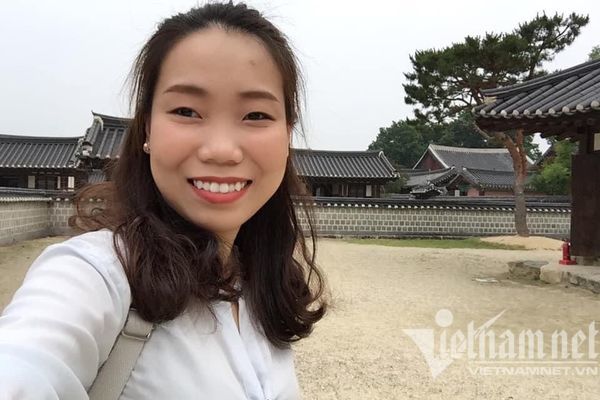 As a failed university entrance exam student, Doan Thi Hai Duong just won a scholarship with a monthly stipend of € 2,800 in a doctoral program at Max Planck for Plant Breeding Institute – Germany.

It is one of the institutes of the Max Planck Society, one of the leading nonprofit science and technology organizations in the world, with 33 Nobel laureates.

Doan Thi Hai Duong is the youngest of three siblings in her family. Since her childhood, she dreams of becoming a doctor. Her favorite subject was biology.

“Even though I didn’t go to a special school, I always did my best to do well in high school. My goal since grade 10 was to study abroad when I saw that my cousin got a scholarship to study in Japan, ”Duong recalls.

In order to make his dream come true, Duong worked hard to improve himself in English and biology. In 2013, Duong passed the entrance examination to Hai Phong University of Medicine and Pharmacy. She did not succeed. In 2014, she tried again, but to no avail. She eventually applied to her second option, Hai Phong University, with a specialization in biotechnology. After doing various lab work on campus, she developed an interest in botanical biology.

“After I graduated in 2017, I realized that my resume was not impressive enough for me to apply for a foreign scholarship. I therefore applied for a research position in the Department of Molecular Biology of the Institute of Agricultural Genetics. I received advice from eminent teachers, had access to modern equipment and even had the opportunity to go to the Philippines to practice for three months, ”she says.

The experience of a professional research environment abroad prompted Duong to apply for a master’s degree in Korea. In June 2017, Duong passed the interview conducted by Professor Kim Jae Yeon and received a Masters scholarship from National Gyeongsang University.

It wasn’t easy for Duong when she first arrived in Korea. “Although I was mentally prepared, it still took me over a month to get used to the workflow. I must have stayed up late for several nights. I struggled with what a lot of people could easily accomplish. But that only made me more determined. Due to his efforts, Duong achieved excellent results and defended his project on time.

However, a week before receiving his masters degree in August 2020, Duong learned that his father had died from a serious illness. Due to the complicated situations surrounding the Covid-19 epidemic, she was unable to return to Vietnam.

“My father always encouraged me to recover from failure to pursue my dream. Not being able to meet him for the last time devastated me. This, added to the pressure from studying, made me postpone my plans to continue my studies for my doctorate because I was suffering from depression, ”said Duong.

After a while, Duong started to recover. In 2021, she completed her resume to apply for PhD scholarships. Of the 10 universities Duong applied to, she received three responses. In April 2021, she obtained her first interview with the VIB-UGent research center for the biology of plant systems (Belgium) but was ultimately rejected.

Three months later, she got another interview with the University of Jena. “After introducing myself and my favorite research direction, the professor gave a short presentation on the subject. After listening, I realized that the program was not right for me, ”she said.

The third interview took place with the Max Planck Institute for Plant Breeding (Germany). With her experience from the last two interviews, Duong was more confident and passed the first three rounds of interviews. In the fourth interview, the interviewer professor said she was qualified for the scholarships, but expressed concern about her determination to continue her education as it was going to be difficult and stressful. Duong replied, “After three years in Korea, I learned to adapt to the pressure of working in a laboratory. You have to believe in yourself, know your values ​​and be determined to follow your research. “

On September 6, 2021, Duong won the scholarship with a salary of 2,800 euros / month before tax. She will continue her studies in molecular biology, following her master’s level research on altering the botanical genome and plant breeding technology to create new species capable of resisting climate change.

After 11 years of researching herbal medicines used against cancer, a university professor, now 33, decided to go back to school to study for a master’s degree in order to achieve her goal.

Student who wants to “save” Mekong Delta wins scholarship in Europe

Luu Nguyen Nguyet Minh is working on sustainable solutions to help solve the problems of the Mekong Delta.